An epic battle between Angular 2 and React

June 18, 2017
JavaScript popularity continues its rising and the number of web development frameworks and libraries based on it continue increasing. Today we will compare 2 of most used JS frameworks for building SPA applications – Angular 2 and React.

Angular 2 is a framework that makes it easy to build applications with the web, supported by Google. It is is often referred as a MVC framework. Angular 2 combines declarative templates, dependency injection, end to end tooling, and integrated best practices to solve development challenges. Angular 2 empowers developers to build applications that live on the web, mobile, or the desktop. 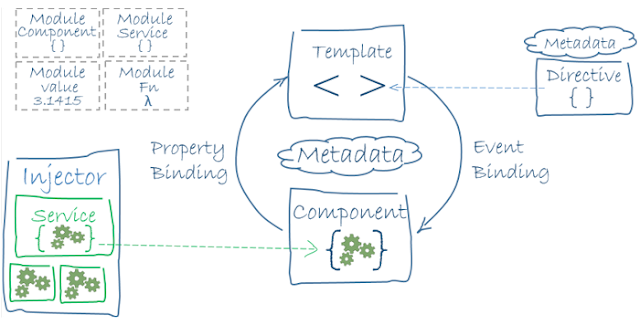 React is an open-source JavaScript library for building user interfaces. Maintaining by Facebook it is rapidly increasing in popularity. React allows developers to create large web applications that use data which can change over time, without reloading the page. Its main goal is to be fast, simple and scalable. React processes only user interfaces in applications. This corresponds to View in the Model-View-Controller (MVC) template, and can be used in combination with other JavaScript libraries or frameworks in MVC, such as AngularJS.

As React is just a library it does not provide any architecture itself. Most used architectures are Flux and Redux. How React works: 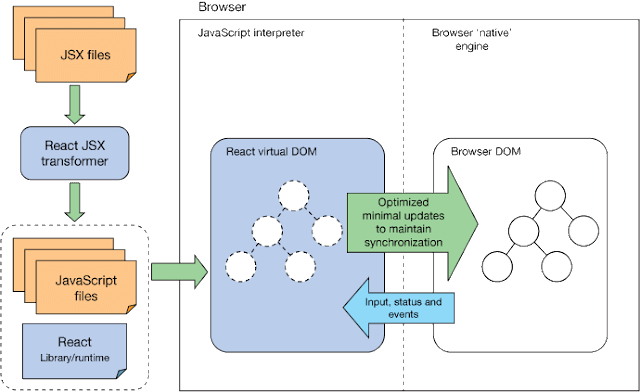 What do Google Trends tell us?

But what about the job trends? 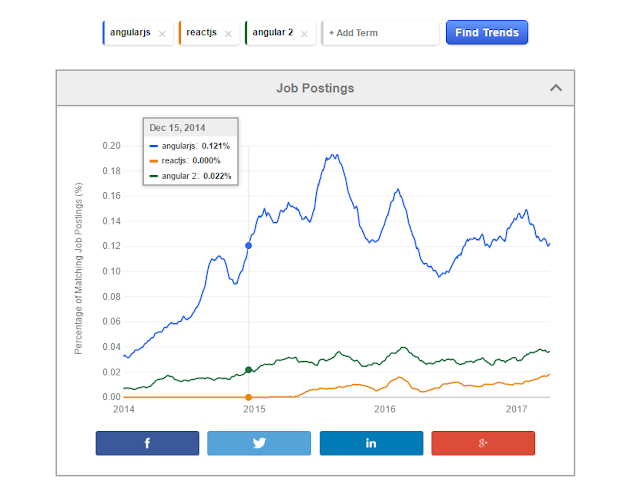 We can see that Angular is a winner in the 2 categories.

Angular 2: Angular 2 itself is a huge library that requires more time to learn. It has a steep learning curve because of its funky syntax and large scope. Also you should take in mind the fact that ng2* developers usually have to invest some extra time to learn TypeScript when they get started with their first Angular project


ReactJs: Compared to Angular 2, React has a way smaller API surface and less custom syntax to learn. React is just a small library, based on Javascript and you can learn it in 1 week. But it has a serious paradox of choice problem and it will take more time to learn the best practices, as there are a lot of ways in which you can do the same thing or go wrong.

Angular 2: Angular 1 is definitely the most popular with largest number of community members. Also, it has the highest number of StackOverflow questions.
While the AngularJS 1 community is very large, the Angular 2 community is just gaining ground.
Angular 2 is just over 25k stars on Github. There are ~15 000 repositories on Github that contain "Angular 2" or "ng2" and are written in TypeScript


React: There’s a quickly growing community, but it isn't big enough to provide all solutions. Also the community is young, so it’s possible you’ll have to do a lot of “reinventing of the wheel” in order to get the specific features you’re looking for.
React is over 69K stars on Github. There are 95, 500 repositories containing the word "react" in them, roughly over nine times more than what Angular 2 has. Still, one of the big reasons for the large number of repositories is that React comes with just a few built-in functionalities and relies on its community to provide it with the needed tooling to develop full-scale applications. 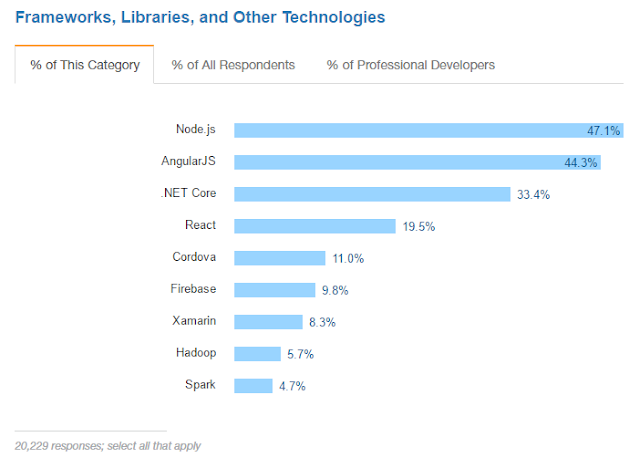 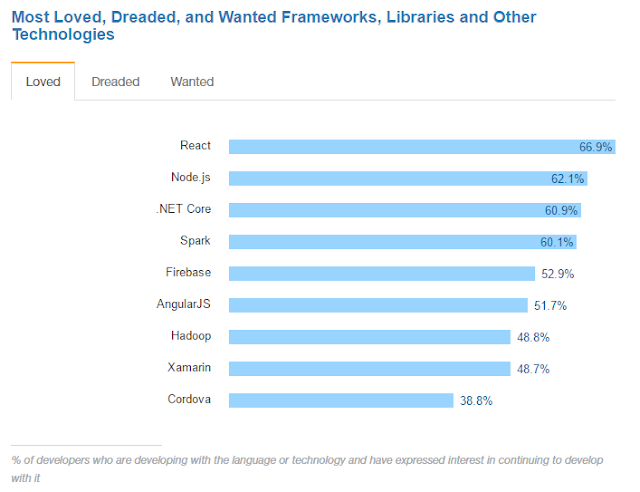 So many people think that tech selections should be all about performance. In the performance battle between Angular 1 and React, React won easily due to Angular 1 dirty checking and digest cycles. But Angular 2 has cleaned up its act. It’s fast, thanks to its highly sophisticated change detection mechanisms.

Angular 2 doesn't do deep object comparison. If items are added/removed to/from an array, change detection won't detect it. The same for object properties as long as they are not directly bound from the view.

There’s not much of a difference between React and ng2, both are performance-wise. 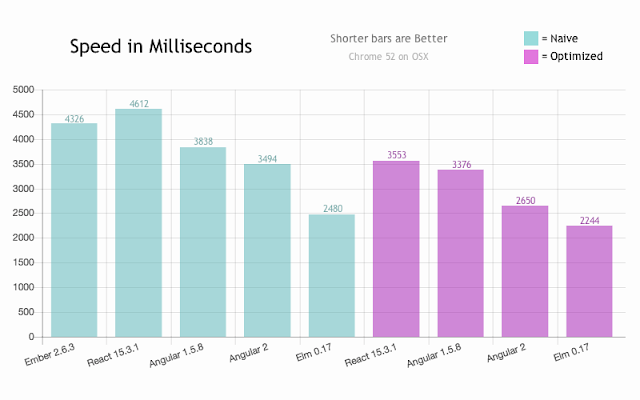 Stuff in Angular 2 You Won’t Find in React:

Stuff in React You Won’t Find in Angular 2:

React and Angular both are great technologies that give miscellaneous opportunities in development. Angular is really good at declarative solutions, but it lacks the freedom and simplicity of React.

Here is a useful list to help you make the decision:
Finally there is no "silver bullet", you need to choose the right solution that will suit your challenges, goals, and long-term strategy.

*I’ll sometimes abbreviate Angular 2 “ng2” — a common practice in the community.
*When we use the word churn in the JavaScript community we are referring to the overwhelming rate at which JavaScript frameworks and libraries are created, adopted and then abandoned.
Angular 2 Front-End Development React 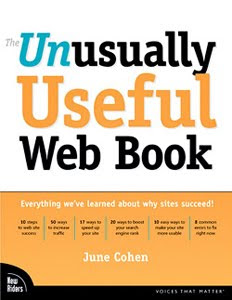 If you are beginner in the field of web design, there are different books that can help you to create your first project successfully. Sometimes the quickest way to get creative inspiration for a project is to see what others have done. I will bring to your attention a pair of books that will give you a lot of advises and concepts. All of them are tested and will help you to gain more experience. The Unusually Useful Web Book What is the thing that is unusually useful in this book? 2 books in 1! The Unusually Useful Web Book delivers large amount of information in a way that is approachable and helpful. The book presents details of planning, designing, building, and maintaining websites and contains do-it-yourself worksheets, lessons from the trenches, advice from experts, and jargon explanations. Anyone who has a passion for web design will enjoy this book for sure! The Design of Sites It is easy to create a website. But it takes research, skills and experience to make well-crafted si 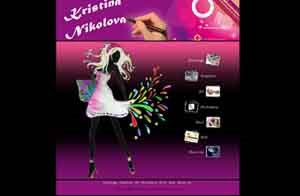 I am very excited to share something with you. These days I have been working on my own personal site www.krisinikolova.com and it is finally online! There you can find my most recent works. I have tried to present myself trough them using non-standard and interactive design. The site presents most of my interests. You can look at my paintings, my graphics, my art works. Similarly you can find some web site designs, developed by me. In case you are interested in Adobe programs, you can visit the page with my Photoshop works. Hopefully there you will find some inspiration to create your next-great-design. Except my works, you can find some information about me and my experience. If you want to contact me, you will find my e-mail address and my Twitter profile. Any comments are more than welcome!